Wasim Khan, resident of Chandan hulla New Delhi. who was beaten mercilessly by the Delhi police. 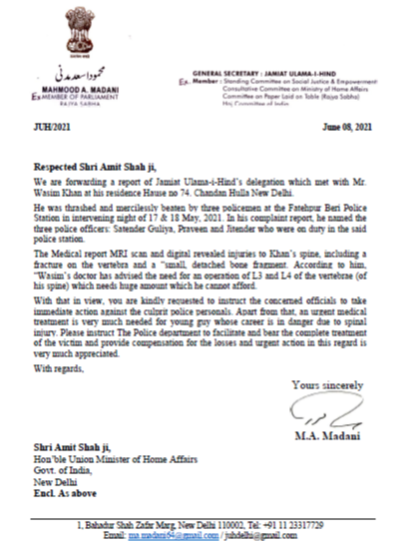 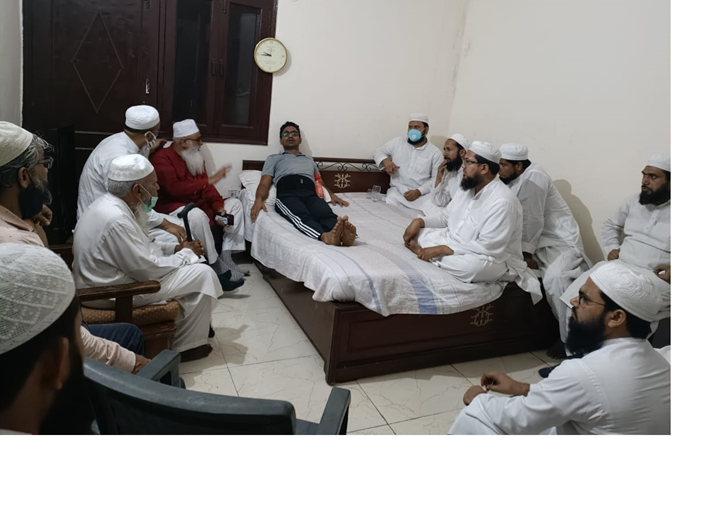 Wasim Khan, resident of Chandan hulla New Delhi. who was beaten mercilessly by the Delhi police.

New Delhi 06, June 2021 Delegation of Jamiat Ulama-i-Hind under leadership of Maulana Hakeemuddin Qasmi, General Secretary JUH, met with Chandan Haula/Mehrauli’s resident 29-year-old Wasim Khan who is barely able to move. The spinal support belt wrapped around his waist does not help him much. Jamiat delegation met with him at his residence Hause no 74. Chandan Hulla New Delh. The Delegation comprises Maulana Qari Abdussami, Delhi, Maulana Ziyaullah Qasmi, Maulana Yaseen Jahazi, Maulana Azeemullah Sididiq, Maulana Mohammad Talha Mehrauli, Janab Aarif Mehrauli, Maualna Aarif Ameeni Mehrauli and several other local JUH leaders. On being asked, he recounted the horrific incident of the night of May 17, 2021. He had been “thrashed” and mercilessly beaten by three policemen at the Fatehpur Beri Police Station, Delhi. Since then, he said, he has “been in pain even when going to the washroom”. In his report, he named the three (1) 3 police officers.,I satender Guliya. /Praveen / Jitender who were on duty in the said police station. What had happened? All Khan had done was phone the Delhi Police helpline number 100 when a fight that had broken out in his neighbourhood seemed to have got out of control. Little did he know that merely reporting this incident to the police as a Muslim man would lead him to be beaten so badly with lathis that he would need surgery. According to 9.30 pm on May 17, 2021, two brothers from the area got into a fight outside his nephew’s home. The fight escalated and others from the neighbourhood got involved. The two sides even threw stones at each other. “This was when some people, including me, tried to intervene by calling the police helpline no. 100,” Khan said. The police from the nearby Fatehpur Beri police station finally arrived at the neighbourhood at around 10.30 pm, broke up the fight and dispersed the crowd, said Ali. At around 11:30 pm the same night, the police knocked at Wasim Khan’s door. They reportedly told him he needed to accompany them to the police station to give his statement as a witness. “The police gathered six of us, all Muslims, including the three of us who had tried calling the 100 helpline number. They said they needed us to give a statement about the fight. It was very late, but we went, The ordeal He described the ordeal that followed. When they reached the Fatehpur Beri police station, he said, the police seized his phone and three or four policemen took him to a separate room. “They simply took me aside and started beating me,” said Khan, his voice now cracking. “They beat me with their lathis. Sub-inspector Satender Guliya hit me with his elbows and kept striking a lathi on my back. The other two men, Praveen and Jitender, kicked me, beat me and even held me upside down.” The three policemen finally let Khan go at around 2:30 am on 18 May 2021. “I came home in serious pain. I was also numbed by what had happened. I took some painkillers before I could sleep,” The aftermath Over the next few days as the pain in his back refused to subside, Khan and his family, decided to visit doctors at the Indian Spinal Injuries Centre. When the pain is unbearable. Then 20/05/2021 I visited to Indian spinal injuries Center. VaSavant Kunj. Then medical staff call the police and made my MLC. Copies of a CT scan, MRI scan and digital revealed injuries to Khan’s spine, including a fracture on the vertebra and a “small, detached bone fragment”. According to him “Wasim’s doctor has advised the need for an operation of L3 and L4 of the vertebrae (of his spine).” When they went to the Indian Spinal Injuries Centre for the MLC (medico-legal certificate), the hospital staff there called the 100 helpline and informed the police that they had a case of violence at the centre. “After the hospital made the phone call, people from the Vasant Kunj police station came and recorded Wasim’s name. Later we went to the station ourselves and tried to register a complaint in writing. In his complaint, Khan stated that “these injuries could have caused my death” and appealed for a criminal case against the policemen concerned under Sections 308 (attempt to commit culpable homicide), 326 (voluntarily causing grievous hurt by dangerous weapons or means), 331 (voluntarily causing grievous hurt to extort confession) and 342 and 348 (pertaining to wrongful confinement) of the Indian Penal Code, 1860. The complaint asking for a vigilance enquiry was registered by the police on May 20, 2021 and Khan even got a message on his mobile phone confirming that the complaint had been registered. No action yet However, there has been no update on the case in the two weeks since then. The matter is under the jurisdiction of the Deputy Commissioner of Police (DCP) South Delhi. The delegation demands (1) Action against the responsible police officials (2) Compensation for the loss (3) Complete treatment of the victim which shall be born by the police department/govt 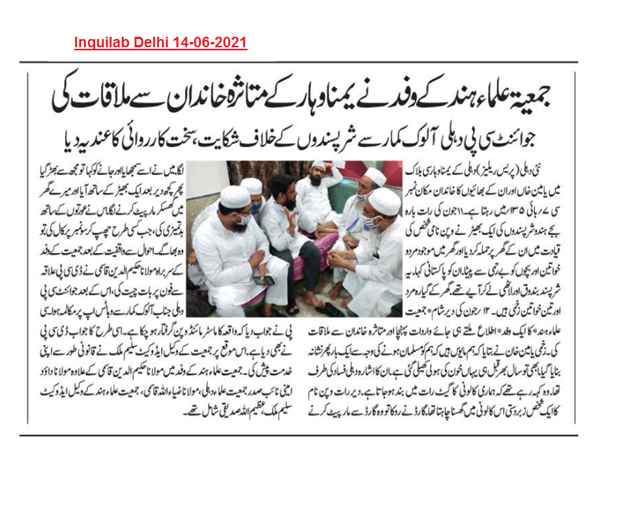 Members of one family including women were BEATEN late night by communal forces in Delhi Mustaf...
June 24, 2021, 1:26 p.m. None, Delhi