A delegation of Jamiat Ulama-i-Hind met with senior police officials and sought to stop the selective arrest of innocent persons in Jahangeerpuri, Delhi 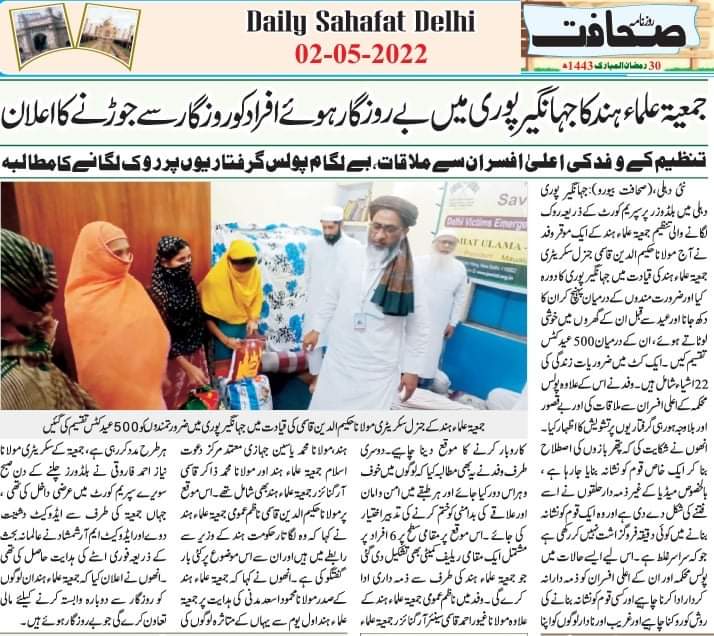 A delegation of Jamiat Ulama-i-Hind met with senior police officials and sought to stop the selective arrest of innocent persons in Jahangeerpuri, Delhi
JUH also distributes Five hundred Eid kits among the needy and vows to rehabilitate affected shopkeepers
New Delhi: May 1
A distinguished delegation of the Jamiat Ulama-i-Hind, an organization which moved the Supreme Court to ban the use of bulldozers in Jahangirpuri Delhi, today visited Jahangirpuri under the leadership of Maulana Hakeemuddin Qasmi, General Secretary of the Jamiat Ulama-i-Hind and reached out to the needy persons there.
The Jamiat also distributed 500 Eid kits among them. One kit contains 22 household items.
Then the delegation also met with high police officials and expressed concern over the arrest of innocent persons. It complained that a particular community is being targeted by using the term "stone pelters", especially the irresponsible sections of the media who did not spare a single minute in targeting the particular community.
Therefore, in such a situation, the police department and its senior officials should play a responsible role and stop the practice of targeting a particular community. The poor and needy people should be given a chance to restart their business. On the other hand, the delegation also demanded that the police administration should play a proactive role in addressing fear and anxiety prevalent among the residents.
A six-member local relief committee was also formed at the local level on behalf of the Jamiat Ulama-i-Hind to help the needy persons there.
The JUH delegation included the General of Jamiat Ulama-i-Hind and Maulana Ghayyur Ahmad Qasmi, Senior Organizer of Jamiat Ulama-i-Hind, Maulana Muhammad Yaseen Jahazi, official at Markaze Dawate Islam Jamiat Ulama-i-Hind and Maulana Muhammad Zakir Qasmi, Organizer of Jamiat Ulama-i-Hind.
Maulana Hakeemuddin Qasmi the head of the delegation said that he was in constant touch with the concerned Minister of Government of India and had discussed the matter with him several times. He said that Ulama-i-Hind has been helping the affected people in every possible way since day one. We under the leadership of Maulana Mahood Madani sb were the ones who petitioned against the use of bulldozers in te apex court.
.. .. .. .. ...
Dear editor,
Please publish this press release and oblige
Niaz Ahmad Farooqui, Secretary- JamiatUlama-i-Hind (9312228470)
May 1, 2022